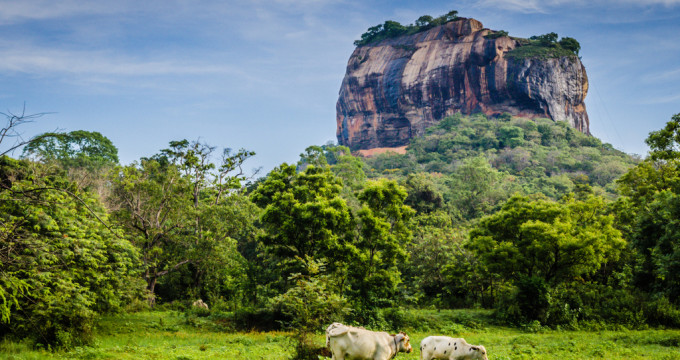 The criteria for defining a “Wonder of the World” is wide and varied. In today’s context, with the marvels of modern technology at our fingertips, creating a “Wonder” cannot be compared to what it was like thousands of years ago, when man had to use his inbuilt skills and intelligence to create something out of nothing.

This is exactly what the renegade King Kashyapa of Sri Lanka did centuries ago, when he needed to barricade himself against his enemies, and chose one of the most inaccessible locations in Sri Lanka where he designed and constructed his “Fortress in the Sky”.

“Sigiriya” is a massive monolith of red stone rising a surprising 600 feet into the sky from the green scrub jungle surrounding it. Once a hermitage for Buddhist monks, its importance as a seat of royalty began and ended in the last quarter of the 5th Century under King Kasyapa, who conceived and perfected the construction of this masterpiece under the shadow of guilt, desperation and paranoid fear. His tale is one of jealousy, avarice and greed but his architectural skills and knowledge were from centuries in the future and his ability to make ambitious plans and dreams a reality, are legendary.

Kasyapa, the eldest son of King Dhatusena, the great tank builder, usurped the throne from his father by force and imprisoned him to die a slow and terrible death. Arrogance combined with the fear of losing his throne and a delusion of divinity drove him to construct on the Sigiriya Rock, a palace perfect in every way – impregnable as well as
aesthetically and visually pleasing. Even today it bears witness to the immeasurable beauty, elegance and comfort it would have originally provided.

King Kasyapa’s architectural genius was not confined to the summit of the rock fortress. It extended along the rock face, and in the scrub jungle surrounding the base of the rock itself. Surrounding the foot of the rock and extending for several hundred metres are Asia’s oldest surviving landscaped gardens, with underground pipes carrying streams of water, which even today, spout up at various point in water fountains. Symmetrically planned ponds make one wonder at the ability of this king to forecast geometric trends of the future.

Ground level fortifications include a regular water moat as well as a mud moat, both long and wide enough to deter even the sturdiest invaders. Sentry look out points were devious as they were functional. Cut into the rock face at various points, they are tall and wide enough for a man to be lowered down and in to. Any sentry foolish enough to fall asleep at his post would plummet to the ground lying far below!

This king’s constant need to be stimulated and surrounded by beauty is apparent as one climbs the rock. The famed 10-foot high Mirror Wall is distinguished by a coating of polished lime, which even today gleams and reflects like glass. The mirror wall borders and protects the world famous gallery built along the rock face along which visitors must pass to climb a caged staircase to view the famed “Sigiriya Frescoes”. This pocket of paintings catapults the ancient beauty of the Sigiriya maidens right into the present, permitting visitors to enjoy their doe-eyed seductive beauty which gives credence to the legend that among his many talents, King Kasyapa was also a great connoisseur of beautiful women.

Passing all these wonders, climbers reach the Lion Terrace. Bounded on three sides by a low wall and on the fourth by sheer cliff, it is a sight to behold. The gigantic lion, which once crouched here, half out of his den, is a magnificent architectural concept. Having made it thus far, entry to this city at the summit of the rock is through the jaws (giriya) of the menacing lion (sinha) – intimidating to say the least and extremely difficult. Today one has to merely climb through two giant clawed paws to reach the steep stairwell and wind-blow railing that takes one on the final lap to the top of this monumental three acre site housing King Kasyapa’s “City in the Sky”.

The sheer genius of the man is apparent in his conception of the original palace, which stood at the summit of this giant rock. Water trickled through channels under the floor of the colonnaded Royal Summer House. Bathing pools were cut out of sheer rock. Below and to the east, a canopied “throne” was carved from naked rock upon which Kasyapa would recline and absorb the beauty of the city he had built.

King Kasyapa’s end was a tragic as his reign was glorious. Seven years after his ascent to the throne in 477 AD Kasyapa moved into his new palace and eleven years later, in 495 AD he descended from his impregnable fortress to meet his brother in battle. Moggallana had returned from India with an army of combined Chola and Sinhalese troops and the awesome battle was fought on the treacherous plains near the modern village of Habarana.

At the height of battle, Kasyapa’s elephant, sensing a hidden swamp lying before him, momentarily turned aside. His army, fearing their leader had turned in retreat, became confused, leaving Kasyapa defenceless. Flamboyant to the last, his exit was to be as dramatic as his life had always been. Drawing his dagger, Kasyapa cut his own throat, raised the blade high in the air and stuck it back in its sheath before falling……

Today designated a UNESCO World Heritage Site, a sense of quiet calm and serenity pervades the area and visitors could only imagine the majesty and magnificence of this bygone era. A strange twist of fate led King Kasyapa to commit an unforgivable crime, but he left behind a memorable legacy – “Sigiriya” – described as “one of the most mesmerising royal cities that ever graced the earth….”

This feat of engineering and architectural excellence makes one wonder at the brilliance of a man who without any formal training in engineering was able to create such a magnificent masterpiece centuries ago.

Perhaps the only “wonder” might be at the need to question – “Is Sigiriya the 8th Wonder of the World?” 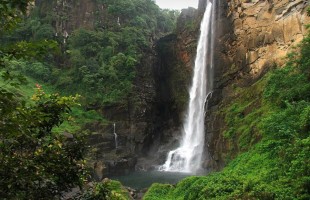