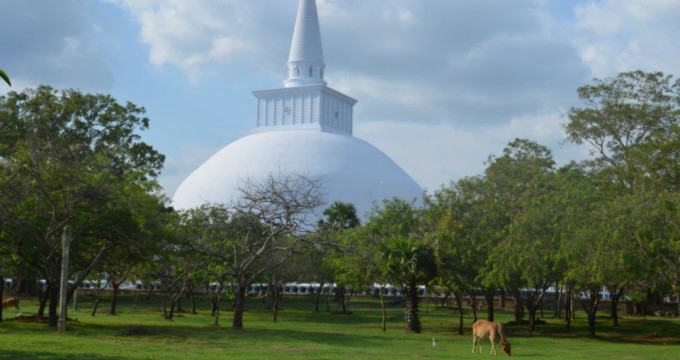 Anu-radha-pura Kingdom lasted one thousand and five hundred years from 380BC. This city is home to many of the earliest grandest monuments of Sri Lanka. A popular destination of Sinhalese Buddhist’s prilgimages because of its many ancient Buddhist monuments.

With the dawn of the second century BC, adventurers from across the Palk Strait had begun to settle down in the northern coast. One such intruder called Elara, became supreme in almost whole of the North and reigned from Anuradhapura. He was later challenged by the ruler Gemunu, son of King Kavantissa. Later this independent ruler, Gemunu of the South met in combat with Elara and the latter was killed. For the first time a single kingdom for the island arose.

Dutugemunu’s reign saw the culmination of Buddhism Dutugemunu (161-137 BC) contributed immensely for the religion of Buddhism. Anuradhapura Kingdom lasted one thousand and five hundred years. Despite the intrusions and clashes of South Indian Chola, Pandyan and Pallava, there prevailed stability in the continuity of the Anuradhapura civilisation.

Due to the strong diplomatic relations among the countries like Rome and China, in first century AD. Fa-Hsien visited Sri Lanka. And in seventh century, Hisuen T’sang regretted his failure of his attempt to reach Sri Lanka.

The 13 meter high statue carved out of solid granite, goes back to the 5th century, to the reign of King Dathusena. (about 50km south of Anuradhapura)

On a rainy day, it is said, that one can see droplets of water falling off the tip of the statue’s nose hitting the ground exactly between the toes.- a testament to the architectural accuracy of the sculptor. The brick enclosure around and above was built recently to protect it from weather.

Thuparama is considered to be the oldest dagoba in Sri Lanka and is believed to enshrine the collar bone relic of Lord Buddha.

The guard stones like these are generally found in pairs at the entrance to temples, palaces and other revered sites.

Isurumuniya Lovers
Isurumuniya temple built in the 3rd century B.C. is noted for its rock carvings. The best known among these is the “Lovers”. Many a poet and song writer has taken inspiration from this carving to write their masterpieces. It is believed that the carving may represent Saliya the son of the great king Dutugamunu and the low-caste maiden whom he loved.

Ruwanveli Seya
Popularly regarded as the greatest, and certainly the most popular among the Buddhists, of the stupas at Anuradhapura, Ruwanveli Seya, is the pride of the Great Emperor Dutugamunu. Raised in the 2nd century B.C. this dagoba is supposed to have the perfect water bubble shape. Among the many statues in the courtyard there is one that is of a larger-than-life man. This is considered to be the king himself watching his work from a respectable distance. 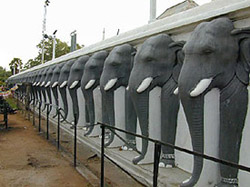 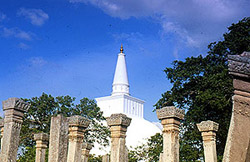 Abhayagiri Stupa and Monastery
Abhayagiri is the largest monastery complex in the Anuradhapura kingdom. Founded in the second century BC by king Valagamba(also known as Vattagamini Abhaya) was an international institution by the first century AD.
Covering an area of 200ha the monastery include full components of a Buddhist temple as well as oth

er buildings. The stupa at Abhayagiri is 108m tall and one of the tallest brick buildings of the ancient world.

The finest Buddha sculpture in Sri Lanka the Samadhi Statue (3- century AD) is among its many fine stone carvings.

Mihintale
The temple of Mihintale is where Thero Mahinda, the son of Great Indian Emperor Asoka introduced Buddihism to the king of Sri Lanka Thissa.
Mahinda’s sister Theri Sangamitta carried a off shoot of the the ‘, the holy Bo tree that gave shelter to Buddha to attain Nibbana. Sri Maha Bodhi’ The Bo tree was planted at Anuradhapura, where it still grows as the oldest tree with a recorded history in the world. 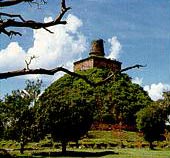 The monastery complex is built where it is believed to be the cremation grounds of the Mahinda Thera who introduced Buddhism to Sri Lanka. Founded by King Mahasena (276-303AD) the stupa at 120m high was the third tallest monument in the world at the time of the fall of Roman Empire.

Museum
The Folk Museum has a collection of artefacts illustrative of the rural life of the North Central Province and the near by Archaeological Museum display what is excavated from Abhayagiri temple explorations.

Ritigala
A beautifully paved footpath, several elevated platforms, ruins of an old hospital and remains of a terraced pond are what is unearthed at this 180 BC Buddhist monastery at the foothill of 600m high Ritigala Rock. Dating back to around 350 B.C is one of the oldest historical places mentioned in the ancient chronicles. (about 50km south east of Anuradhapura 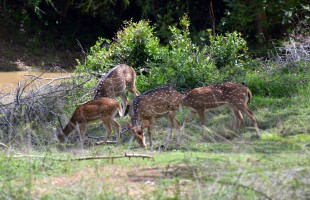 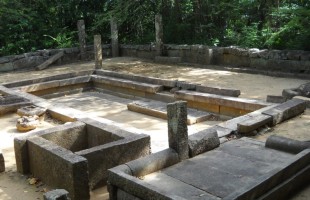