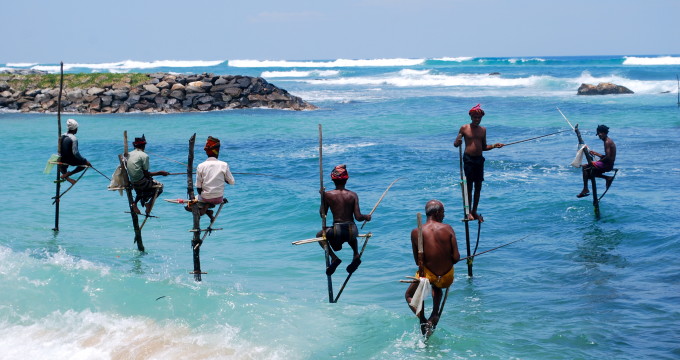 It’s not a mirage or a beautiful dream that will melt away when you open your eyes. You are awake, the sky is a glittering blue and catamaran boats are beached on the amber sands beyond the tide. The air is scented with tropical flowers, and palm trees and causarinas whisper drowsily, throwing shifting, feathery shadows on sun-drenched shores.

The scene might be any Sri Lankan beach – south, north, east or west, which girdle the island’s seaboard. strung in a line of colourful and inviting resorts. Each resort has its own special attractions and distinctive charm and hinterlands of exceptional natural and human interest. Many are fringed by magical underwater coral reefs, and have numerous submerged shipwrecks dating from centuries ago. Further up along the western coast and north of Colombo, fishing villages with their fleets of boats and catamaran canoes, noisy fish markets and fairs, the 17th century Dutch period Hamilton canal, mangrove wildernesses, water-bird colonies and toddy tapping lend a special native character to the palm-fringed golden beaches here. Lie back and enjoy endless vistas of serene untouched landscapes, or be adventurous and join one of the many aquasports centers bordering the coast. The beautiful dream lives on.

Sri Lanka, an island in the blue waters of the Indian Ocean and Bay of Bengal with over a thousand miles beautiful golden beaches fringed by coconut trees.
A large percentage of the hotels and resorts are located along the coast of Sri Lanka. In most cases, directly to the beaches and the places along the coast, but less in the few kilometers away towns and villages.

Sri Lanka’s beaches on the west and south coasts

start at Negombo, located north of Colombo, and stretch along the coast to Hambantota.
In Gegensatzt to the west coast, the beaches on the south coast are definitely better. The beaches are sandy, so do not fall steeply into the water, and this is where most hotels and resorts are found.
South of Colombo Mount Lavinia, Wadduwa, Kalutara, Beruwela, Bentota, Induruwa, Kosgoda, Ahungalla, Hikkaduwa, Galle, Unawatuna, Koggala We-ligama, thickness Walla, Tangalle and Hambantota finally. The beaches on the west and south coasts are connected to the A3 from Negombo to Colombo. Then the A2, better known as Galle Road, bishin to Galle. The railway traverses the path from Negombo to the southern tip of Sri Lanka.

On the eastern and northern coast of Sri Lanka

extend the beaches in a gentle curve of Arugam Bay to Kuchchaveli. The beaches on the east coast are usually of sand with shallow water, pretty coves and lagoons, coral gardens and natural harbors. The best beaches on the east coast are in Nilaveli, Kuchchaveli , Marble Bay, Sweat Bay, Dead Man or S Cove, north of Trincomalee, its magnificent harbor. The southern section of the east coast of Sri Lanka comprises the quiet beaches of Passekudah, Kalkudah and Arugam Bay. The eastern and north-eastern coast beaches are on land (A4) from Colombo on the gem city of Ratnapura, past the central highlands and finally reach Pottuvil. The 137 km stretch of coastline from Batticaloa after Trincornalee can be reached via the A15, the beach of Kuchchavelli on a side road. Trincomalee has the only railway station the east coast and is connected to all the major lines.

District: Galle
half an hour drive from Bentota is Ambalangoda , home of the mask carvers.

District: Ampara
distance from Colombo: 314 km Arugam Bay , one of the most beautiful bays on the east coast of Sri Lanka and ideal for surfers suitable. The east coast offers endless possibilities for all kinds of water sports and underwater photography. The many shipwrecks along the coast are a tempting challenge for divers.

District: Batticaloa
distance from Colombo: 314 km Batticaloa is famous for its “singing” Fish and picturesque lagoons.

District: Galle
distance from Colombo: 62 km The Bentota Resort Complex is a romantic rendezvous of river and sea with several hotels. station, post office, shopping arcade and an outdoor theater.

District: Kalutara
distance from Colombo: 56 km Beruwela, where the development has made ​​tremendous progress in recent years. Open all year for a beach holiday suitable.

District: Galle
distance from Colombo 98 km / 116 km Galle is the main city in the south, with an old world charm and famous for its Dutch “Galle Fort”, mallets, carvings, ebony and precious stones.

District: Galle
distance from Colombo: 98 km Hikkaduwa is the place for underwater pleasures and its famous coral gardens.

District: Jaffna
distance from Colombo: 398 km Jaffna . is located in the northern tip of Sri Lanka, is both a major seaport and an important city Apart from the ancient monumental buildings, Jaffna offers spectacular beaches.

District: Batticaloa
distance from Colombo: 282 km Kalkudah Bay is a 2 km long stretch of beach and one of the most beautiful beaches on the east coast on the way to 32 km north neighborhood of Frankfurt Batticaloa. Passekudah Bay is another 4km beach, south of Kalkudah. The combined beaches Kalkudah and Passekudah are ideal for swimming, the sea is clear, calm and protected by a reef. The total area of Kalkudah and Passekudah was declared in 1973, “National Holiday Resort”.

District:
removal of gall: 12 km Koggala beach is one of the prettiest in Sri Lanka. Stilt fishermen are a familiar sight.

Two and a half hours drive from the airport is the small but bustling town of Kalutara.
The golden beach of Kalutara is lined with lush palm trees and is ideal for swimming.

District:
Distance from Colombo: The island is probably the driest and kargste area in Sri Lanka. Mannar is connected to the mainland by a 3 km long causeway. Apart from its picturesque Portuguese-Dutch Fort is not Mannar particularly interesting. At the western end of the arrival and departure point for the ferry to India, which was operated until 1984.

District:
Distance from Colombo: 4km southeast of Weligama is one of the most beautiful beaches in Sri Lanka – Mirissa Beach. Its headland separates its small fishing harbor from the beautiful sandy beach with calm, clear water. Mirissa is the alternative for a quieter place to Unawatuna or Hikkaduwa – Whale Watching possible.

District: Colombo
Distance from Colombo: 12 km The well-known by the colonial Mount Lavinia has a “better” beaches. The sand should be the softest, the waves are calm and clear. Negombo Beach District: Gampaha distance from Colombo: 37 km Negombo, a characteristic fishing village, 37 km north of Colombo, just 6 km from the international airport.

District: Trincomalee
Distance from Colombo: 271 km Nilaveli in 1885 the venue for the ” International Funboard Championships . ” . The beach has plenty of water sports or whale watching Pigeon Iceland ten minute boat ride from Nilaveli beach, is an ideal place for diving , snorkeling or just sunbathing.

District:
Distance from Colombo: Tangalle is one of the most beautiful places along the coast. The bays are modern attraction with white sand beach of Medaketiya Shimmer in the Northeast and smaller bays to the west.

District: Trincomalee
Distance from Colombo: 257 km 257 km from Colombo Trincomalee is the ideal retreat for beach addicts. With its fine natural harbor of Trincomalee and offers some of the best beaches in Sri Lanka.

District:
Distance from Colombo: Unawatuna Beach, near Galle, is a curved, golden beach. The beach was voted one of the 12 best beaches in the world. An offshore reef protects the beach, making it swim safely. Rumasssala, a rocky outcrop in Unawatuna, part of the legend of Ramayana.

District: Colombo
Distance from Colombo: 22 km Wadduwa is better known for its handicrafts made ​​of reeds and bamboo. The beach unspectacular.

District: Matara
removal of gall: 27 km Weligama with its picturesque bay and small island off the coast. Weligama is known for the famous stilt fishermen. 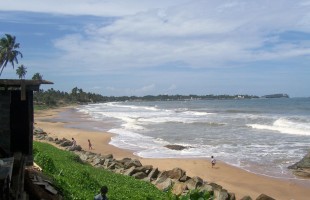 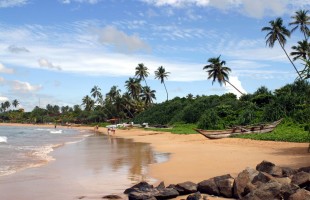