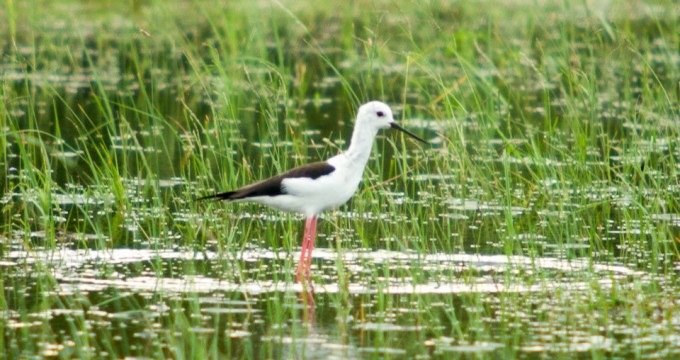 There are superb opportunities for birdwatching, though highly seasonal. More than 400 species make this small island a joy for bird lovers. The many different eco systems in different parts of the island e.g. rainforest, dry zone jungle, montane forest, wetlands etc., or even back gardens or the roadside are home to an amazing variety of avifauna. From the crack of dawn until the bats are circling around at dusk, birdlife abounds.Special bird sanctuaries are situated in all parts of the island but the ethnic conflict has made only the following accessible at present.

Ruhuna National Park or Yala abounds with birdlife of the forests, scrub, plains, marshes, lagoons, seabirds and several migrant species, totalling about 250 species during the migratory season (approximately September to April). Large numbers can be seen during the drought months of July to October.

Yala East or Kumana Sanctuary
This southern extremity of the Yala group of reserves is another paradise for waterbirds and their observers. The focus here is a massive mangrove swamp of over 500 hectares to which aquatic birds flock in their huge numbers to breed and nest. The best time of year to visit this area is April to June.

Bundala National Park
This is the southern terminus for winter visitors to the island during the period from November to March. More accessible than Yala, it’s probably best for the sheer numbers of migrant birds during the season. Bundala is also home to the only resident flamingo population in the south.

Kalmateiya Bird Sanctuary
Also in the south, this reserve focuses around a mature mangrove swamp housing an extraordinary variety of waterbirds. Wirawila-Tissa Bird Sanctuary is a sprawling network of lagoons with a daily performance by resident and migrant birds.

Chundikkulam and Kokkilai Lagoon
Bird Sanctuaries on the northeast coast attract spectacular numbers of birds during spring and autumn on the eastern migratory route. However these and the Wilpattu National Park, also famous for bird as well as wildlife, are now sadly off limits due to present ethnic warfare.

Accommodation in Bird Areas
The main bird watching areas coincide with or are close to other National Parks and their Accommodation. This includes the government run Park Bungalows, which need to be booked well in advance to avoid disappointment. There are also private hotels and campsites available close by.

More Information
Serious birders should head for sanctuaries in the south and east. The Ceylon Bird Club will have more information on the island’s avifauna here as well as the Club’s activities and can be reached at certain hotels (e.g. Sigiriya, Kandalama and Ranweli). They actively encourage nature awareness programmes by conducting bird-watching trails with trained guides. Hotel Sigiriya has recently launched the Shahin Trail for ornithologists and nature lovers, incorporating a bird list of 112 species. A recent survey by Ceylon Bird Club members to conduct a waterfowl census of the Sigiriya area showed 22 species of aquatic residents with a population of over 400 individuals.