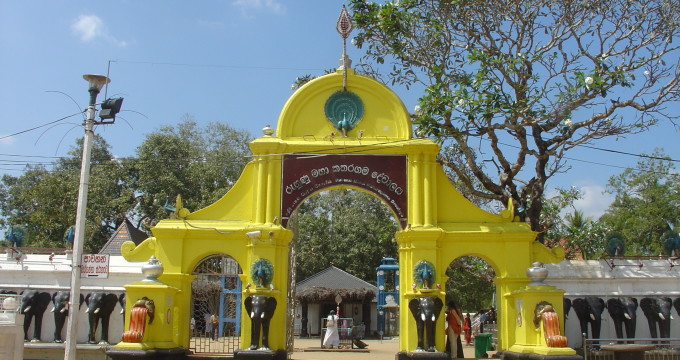 Set deep in the south east of the island are the hills of Kataragama, one of the most important and holiest pilgrimage sites for Hindus, Buddhists and Muslims. The town of Kataragama is 18 km from Tissamaharama, and the devout perform pilgrimage here before making any plans for the future, even bringing a new vehicle here on its first journey to be blessed. Visit during festival times in the months of July/August and you would see thousands of pilgrims practice self-mortification in fulfillment of vows to the Gods. Devotees fast, meditate and pray; bathe in the Menik Ganga (River) and then worship at the Maha Devale before facing their ordeal. This includes the famous “fire walking” – when believers walk on a bed of burning, live coal.

Hindus, Buddhists and Muslims flock to this jungle shrine to worship and make offerings to God Kataragama. Legend has it that King Dutugemunu built it in honour of God Kataragama in the 2nd Century BC. Others say that it is even older than that, since the Buddhist Kirivehera dagoba dates back to the 1st Century. Kataragama can certainly be traced back to the 3rd Century BC, when it was the capital of the warrior class of the Kshatriyas. This was the same clan that was invited by King Devanampiyatissa to the historic ceremony of the planting of the Sacred Bo sapling in Anuradhapura, also in the 3rd Century BC.

The principal shrine, the Maha Devale, is supposed to contain the Lance of Skanda (the 6 faced, 12 armed Hindu God of war, who is supposed to have rested on top of Kataragama mountain after defeating an army of demons). The neighbouring shrines are devoted to the Buddha and Ganesh (remover of obstacles and champion of intellectual pursuits). The intense and utter devotion of the pilgrims is astounding; as are the feats of penance they perform to appease their God, such as piercing their bodies with large iron hooks to which heavy carts are attached, which they pull along, apparently feeling no pain or discomfort.

The Menik Ganga (River) splits the unremarkable town into the main residential section on one side, and an extensive religious complex spreads out on the opposite bank. Accommodation ranges from the fairly pricey to low budget, and there is plenty of choice. There is also a bank and post office. There’s a direct bus from Colombo to Kataragama, as well as from other towns on the south coast. The town is generally busy on weekends and Poya (full moon) days, but nothing comes close to the frenzy of the predominantly Hindu festival that takes places over two weeks during the months of July and August, and which has to be experienced to be believed.

An old pilgrimage route from Jaffna to Kataragama passes through Yala and most of the east coast.

Temple Complex
Within the sacred area, you will find temples devoted to all three religions. The Sinhala hero King Dutugemunu was responsible for building the Hindu shrine to the resident God Kataragama in the 2nd Century BC, while the Buddhist Kirivehera Dagoba was built in the 1st Century BC. The most importance is attached to the simple Maha Devale, containing the trident or vel of the six faced, 12 armed Hindu war God Skanda, another manifestation of the God Kataragama. Devotees of all three religions make daily offerings here. Other deities worshipped here include the elephant headed Ganesha. Muslims make their way here to worship at the shrine of their saint Khizr Thaka, at the nearby Masjad-ul-Khizr mosque.

Kataragama Festival
The whole complex gets into full gear in July and August during the Kataragama festival. This is chiefly a Hindu event but it draws thousands of devotees from all faiths during the 2 week period. The rituals performed usually follow the same procedure; a bath in the holy Menik River, then wearing clean usually white clothes,the pilgrims make offerings or puja at the temples. It is a time to make vows and to perform penance. It would be strange to think of the Kataragama Festival without the heat and the noise associated with it. Conch shells and trumpets are blown and drums beaten to herald this important Hindu event.

Ritual Masochism
The devout will inflict masochistic ritual punishments upon themselves as penance. These include piercing their cheeks and tongues with large steel spikes, pulling heavy objects with ropes attached to hooks embedded in their backs, or being suspended by such hooks in mid-air. All kinds of voluntary torture take place. Others will carry heavy wooden arch-like structures called kavadi on their shoulders for many miles and dance wildly, some in a trance induced by the pulsating drumming and intense atmosphere. 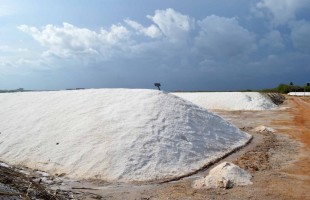 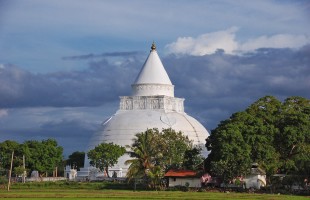