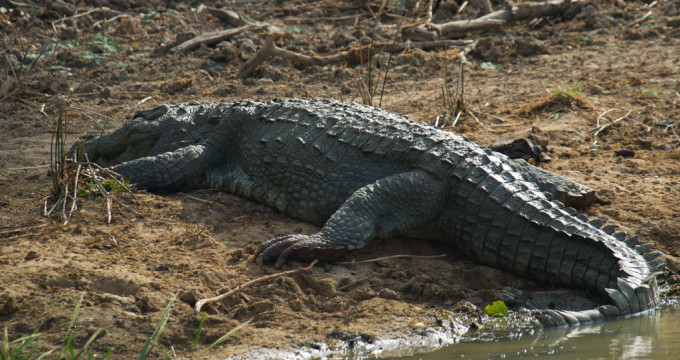 75 endemic species of reptiles have been identified and are abundant throughout the island including many large ones.

Tortoises
Two species, the pretty star tortoise (Testudo (Geochelone) elegans) and the common tortoise, are both found in the dry zone.

Turtles
There are five species of turtles in the seas around the island. Sadly all five face extinction. The largest is the massive leather backed turtle (Dermochelys coreacea (Linne)) which comes here to lay eggs. The other species are the olive riddely, logger head, hawks bill and the green turtle. See Turtle Conservation for more details.

Snakes
83 species of snakes have been identified in Sri Lanka. Although only five of these are poisonous ( cobra, Russell’s viper, Indian and Ceylon krait, saw scaled viper ), they are fairly common. The largest is the rock python which grows to an enormous 9 metres.

Lizards
There are many interesting lizards, the largest of which is the
water monitor (up to 2 metres). This creature along with the land monitor or dragon lizard are pre-historic looking reptiles and are found everywhere. There are alsochameleons, the frilled lizard and the flat horn-nosed lizard and many species of geckoes on the island.
Amphibia 40 frogs and toads have been recorded to date and 16 of these are endemic.