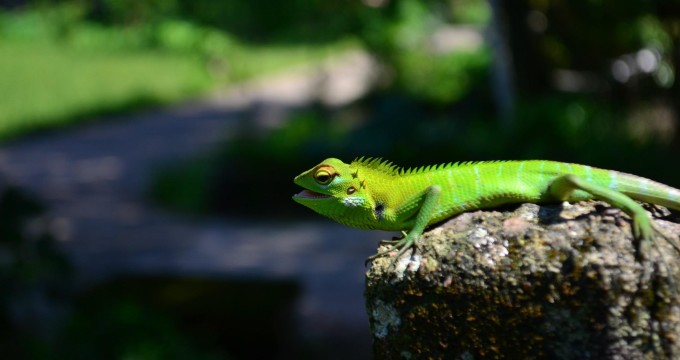 Sri Lanka has 203 migratory and native birds exhibit 236, of which 33 species are endemic. The Lafayette chicken (Gallus lafayetii) was declared the national bird. Frequently encountered are the peacock, Cattle Egret, White-bellied Sea-eagle, and Alexander Rose-ringed Parakeet Parakeet. Most of the endemic species live in the humid region of the island, such as Ceylon Star. In the mountains is the home of Ceylon Flüsterdrossel and Gelbor Nightingale. Other bird species you can meet other hand, to anywhere in Sri Lanka. Particularly favorable habitats for exotic birds of Sri Lanka are the national parks and nature reserves. Here we meet, among others, also the colorful jungle cock. A rich birdlife have the Sinharaja Reserve and the Peak Wilderness Sanctuary (the Adams Peak). Meet the end of September in Sri Lanka in the first few migratory birds. These include various species of swallows and sandpipers, who settled down after a long flight from Siberia and northern and western Europe on the coasts of Sri Lanka and in the wetlands; in the woods on the other hand consider other species such as songbirds, thrushes and cuckoos. The large water reservoirs (storage ponds) in the arid regions of Sri Lanka attract especially ducks, ibis storks and herons, which can also be well observed in the national parks. The Bundala National Park is known for its high number of flamingos. Especially for bird lovers, we have set up an ornithological trip.

See here the journey bird paradise of Sri Lanka in!

89 species of mammals are native to Sri Lanka, of which 14 species are endemic. Sri Lankan Elephant (Elephas maximus maximus) and the Marsh elephant (Elephas maximus vilaliya) are certainly the most impressive in size. Although the elephant population was reduced by the partial destruction of their natural habitat, you will encounter yet large herds of elephants in the Wilpattu National Park, Uda Walawe, Gul Oya, Wagomuwa, and to Yala. The total population of wild elephants should be over 3,000  and the working elephants 500. Encountered herds of over 100 wild elephants at once, is not uncommon. Other animals that can also be frequently observed are buffalo and monkeys, of which the Ceylon Hat Monkey (Macaca sinica) and the Hanuman langur monkey or gray (semnopithecus priam) be residing near temples. More rarely, however, is the Purple-faced langur (Trachyphitecus vetulus). In addition, wild boars, porcupines, mongoose and be lucky to spot leopards and sloth bears and sambar deer (Cervus unicolor), axis deer (Axis, Axis ceylonensis) hog deer and jackals. Especially for our nature lovers, we have established a journey that allows the national parks and protected areas, as well as the observation of whales and dolphins

See here the journey flora and fauna of Sri Lanka in!

Always see again the dragon-like lizards, which are 2 meters long and potbellied scurryacross the street or swim between mangrove forests or lazily in Geäste loll; they are also found near human settlements, where they feed on kitchen waste. Of the 2 endemicspecies of crocodile, the Mugger crocodile is the most widespread. The beautiful star tortoise is the only tortoise. All five species of turtles are protected. There are also 83species of snakes, distributed in various habitats, of which only 10% are toxic as the King Cobra and the Ceylon herb (snake venom) and two types of vipers (viper and sand viper).

Among the 38 species of amphibians in Sri Lanka are 16 unique on the island. An endemic genus, namely Nannophrys, which is represented by three species, in the hill country has its dissemination. This frog species lives on rock edges, about the ever trickles of water, which in turn tadpoles creates ideal living conditions. None of amphibians, however, is toxic to humans.

Most butterflies of the known 242 species are found in the mountains 1,000 meters above sea level. However, only 6 species are present over 1,200 meters above sea level. The most impressive experience is the annual migrant flight of butterflies, which then in March and April for “Samanala Kande,” the butterfly mountain flying. This mountain is popularly known as “Sri Pada” or “Adam’s Peak” and is a place of pilgrimage for Buddhists, Hindus, Christians and Muslims.

Most of the 54 fish species in Sri Lanka are marsh and river species and 14 endemic species are found only in the water constantly flows leading the humid region of Sri Lanka. Because of its natural beauty, many of them typical aquarium fish. Of the 16 British species of fish to Sri Lanka have been introduced, including the trout, which is now widespread in the clear, cold streams of the picturesque Horton Plains.