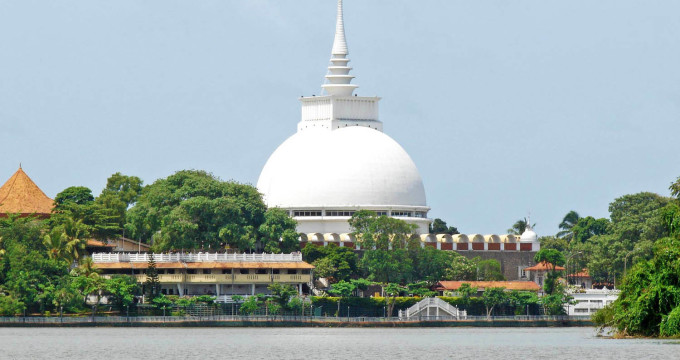 Kalutara is a coastal town some 35 km south of Colombo. Most visitors will approach it from the north, and will behold first not the town but the sight of the imposing white dagoba of the Gangatilake Vihara as they traverse the bridge across the Kalu-ganga – literally the Black River. Visitors will note that having crossed the bridge, many vehicles pull over and stop alongside this dagoba. Drivers can be seen quickly alighting and walking towards a small Buddhist shrine with a pin-kate, or till, into which they place offerings to ensure the success of their journeys. Why not stop, too, and check out the dagoba, which, unusually, is hollow and has a beautifully painted interior.

The Gangatilake Vihara is on the very edge of the modern bustling Kalutara, with its wide highway and endless rows of brightly- advertised shops. It is difficult to imagine today that the town’s history goes back to the 11th century, when a South Indian Prince called Vickramapandya made it his seat of government.  It didn’t last long, though, for a year later he was murdered. About 200 years after that, the maritime stretch between Kalutara and Bentota was planted with coconut on the orders of King Parakramabahu II. Since then, this region has been largely dependent on the coconut and its many by-products for trade, both internal and external.

One of these by-products is toddy, the fermented sap of the coconut flower, which is the favourite alcoholic beverage among Sri Lankan workers. Along the coastal strip of the Kalutara region, and indeed all the way from Colombo to Galle, observant visitors who look skyward will note the two sets of rope running between the palm-leaf crests of the coconut trees. These are used by toddy-tappers to travel precariously – like tight-rope walkers, but also holding on to a rope above them – between trees. The process begins with the binding of the buds of the coconut tree to prevent them from flowering. Over the next fortnight, the buds are mysteriously knocked upon twice a day with a bone. At the end of this period the tips of the buds are cut and a pot is fastened to collect the dripping sap. By using his rope network in the sky, the average toddy-tapper can harvest more than 100 trees every day, emptying the sap into a clay pot, which he empties into a large container by periodically returning to earth.

It was the spice trade that made Kalutara famous a few centuries ago. The Portuguese, Dutch, and British in turn built fortifications here to guard the river entrance to the interior, where the spices, in particular cinnamon, grew. Today, however, the town is most famous for its mangosteens, which are in season from May to July, and sold at the roadside in inviting purple-black heaps. In addition, some of Sri Lanka’s finest basket ware can be found at Kalutara’s Basket Hall. Intricate and beautiful geometrical patterns are used, and the colours are bold.

Kalutara is also the centre of Sri Lanka’s most successful rubber-producing district (rubber is one of Sri Lanka’s three main export crops.) Take any one of the roads that lead inland and you will quickly come across the unmistakable plantations with their formal rows of silvery-trunked rubber trees. The first rubber trees were grown in Ceylon in the late 19th century from seeds smuggled out of Brazil in bales of cotton. The seeds from these initial trees were then dispersed throughout south east Asia, thus providing half a dozen countries with an economic mainstay. But it is Sri Lanka and Malaysia that produce the major portion of the world’s supply of natural rubber.

The rubber trees are tapped to obtain latex, the milky sap, which is released by making a slanting spiral cut in the bark. The sap drains into a small receptacle, usually half a coconut shell suspended below the cut. Every second or third day, for 10 months, the tappers use a special forked knife to shave a thin sliver of bark off the lower side of the cut. During the two-month period when the tree drops its leaves, it is given a rest from tapping. This cycle goes on for some 35 years until the tree is milked dry. Drawing up at a roadside rubber plantation to watch the tappers at work can be an interesting experience, especially if permission can be obtained to visit the factory (usually no more than a formality) to witness the process whereby the latex is produced into sheets of rubber.

Those familiar with the history of photography will be interested to learn that Kalutara was the home in the late 19th century of Julia Margaret Cameron, a notable woman of the Victorian era. She was one of the very first portrait photographers and had pioneered several techniques, such as soft focus and harsh lighting, which heightened the expressiveness of portraits. She took up photography only in 1863, at the age of 48, yet within a decade she had become a central figure in this new medium and had photographed many great figures of her time, including Charles Darwin. Then, in 1875, at the height of her fame, Cameron and her husband vacated their home in England and sailed for Colombo. They remained in Kalutara until their deaths in 1879, and are buried in Bogawantalawa. Some of her pictures can be seen at the National Museum, Colombo. Much of her best work, however, is housed in some of the world’s major photographic museums. 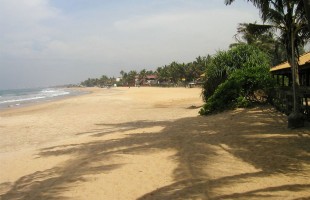 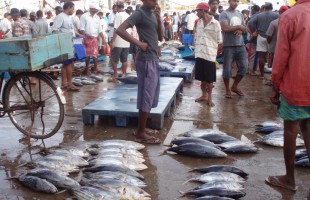