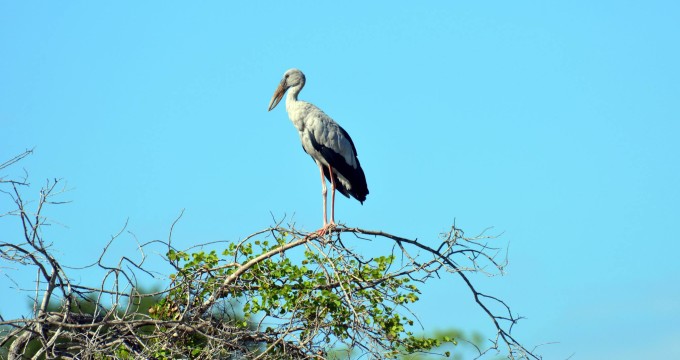 Sri lanka is truly a paradise for birds, especially around the bird sanctuaries and wetland reserves in the south east of the island. More than 400 species have been spotted with 21 endemic to Sri Lanka, while some have been found only in south India. Any visit to a nature reserve, garden, or wetland area will be rewarded with an astonishing variety. Most of the endemic species can be seen in protected areas of rainforest like the Sinharajah Forest.

Some of the notable birds are:

Ceylon Blue Magpie
stunningly beautiful with its blue and chestnut colouring, this bird lives in groups in the hill forests.

Kashmir Red-breasted Flycatcher
This special vacationer breeds only in Kashmir and winters only in Sri Lanka.

Ceylon Paradise Flycatcher
More common than its Indian cousin, it is still a thrill to see it with its crested head and the male’s long ribbon-like tail.

Green-billed Coucal
is one of the rarest birds here and close to extinction.

Ceylon Junglefowl
is an endemic species which is common in remote areas.

Bee-eaters
There are three species of the colourful bee-eaters in Sri Lanka.

Parrots
Parrots Five species of parrots are found all over the island and chattering flocks are a common sight in town and country.

Butterflies
Sri Lanka is a joy for lepidopterists as well as ornithologists. A great many species of butterflies, moths and other winged insects like dragonflies, damselflies and darters are found here. Again, many are on the endangered list as their habitat is destroyed not only by tree felling but by pesticides. These include the Jasobal, Tiger and Baron butterflies However, even in Colombo parks and gardens one can still see the most beautiful butterflies including a few of the larger ones.

A sanctuary for these insects is to be established in the very near future in Galle. It is hoped that this park at Beeke, will re-introduce the species which are endangered and help build up the delicate eco-sysytem in which they thrive. This pioneer programme is the first pre-designed biodiversity generator and hopes to nurture about 20 species of these important environmental indicators at first, increasing to 130 later.