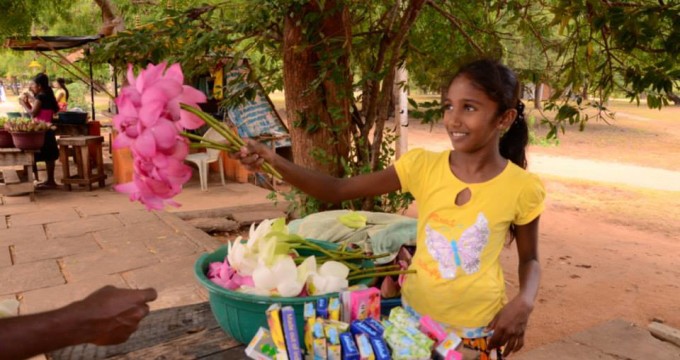 Sri Lanka or Ceylon?
The country has changed names several times during its long history: Taprobane at the time of the Greeks, Serendib time of Sindbad, Ceilão at the time of the Way of the Portuguese Indies, was called by the Dutch Zeilan, Ceylon by the British Ceylan and by the French. On 22 May 1972 the Republic has restored the name of Lanka that it was from the first millennium, Sri adding the word, which means “Shining”. The name Ceylon is still used as a label of quality for tea that is produced on the island.

Surface and reliefs
65 607 km2, or about one-fifth of Italy; the island is 435 km long from north to south and 225 km wide from east to west.
The coastal zone is flat (more than 1000 km of beaches), while the center and the south of the island are mountainous regions, culminating in summit of Mount Pidurutalagala (Mount Pedro), at 2527 m altitude. Among the highest peaks should mention also the Adam’s Peak (2243m.)

Population 19.6 million inhabitants, 74% of Sinhalese Buddhist faith and for 19% of the Tamil Hindu faith. Religions represented: 69% of Buddhists , 16% of Hindus, Muslims 8% and 7% of Christians. With 69% of followers, Buddhism is the main religion represented on the island for over 23 centuries.Sri Lanka has played a considerable role in the history of Buddhism. During the High Middle Ages, in fact, has deployed a network of universities Buddhist extending from the Bay of Bengal to Sumatra. Their position, everyday life that took place there and the lessons that you are dispensed are known thanks to the travel accounts of the pilgrims who came from China to study the precepts of the Buddha: all the testimonies indicate that Sri Lanka was one of the centers principal for worship and teaching of Buddhism. Even today, the island retains one of the most precious relics in Buddhism, priceless: the Tooth of Buddha, guarded jealously by the rulers of the island since the fourth century.

The traditional warmth and unassuming demeanour of the Sri Lankan people have been instrumental over the years in luring visitors to our native shores. Few can resist the open
smiles and careless generosity of a people who will go out of their way to please a stranger. Combine this with the aesthetic architecture, tasteful interior décor and impeccable landscaping of some of the finest hotels in the world, and the Sri Lankan experience lends itself to some of the infinite magic of Paradise.

Sri Lankan hotels come in a wide choice to meet the most diverse of tastes and preferences, always adhering to the strictest international quality standards and codes. While accommodation options include five star high-rise hotels which simply engulf travellers into their warm luxury, there are charming alternatives ranging from smaller luxury hotels, British colonial period bungalows that retain the heritage accents of a forgotten era, club hotels and cottage complexes. Nature enthusiasts… marvel at the rustic wilderness that surrounds safari and eco-lodges away from beaten tracks, or relax in the calm and tranquillity of converted manor houses and theme resorts set in sprawling landscaped gardens. Choose from a multitude of magical landscapes ranging from the sunny beaches and inviting waves of the coast, the misty mountain panoramas of the hill country and the archaeological wonders of the ruined ancient cities… where time has stood still. Time will indeed stand still in your holiday of tropical enchantment, where delightful experiences of serendipity can surprise you at any moment.