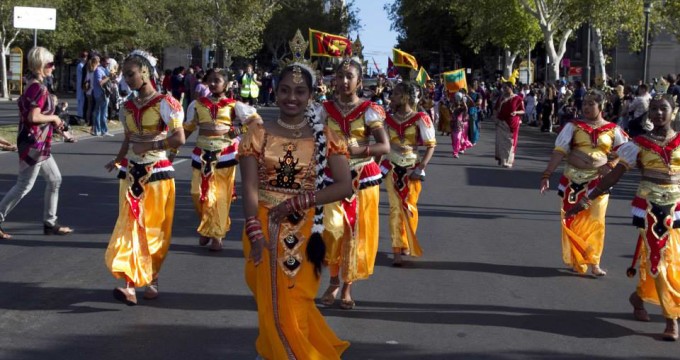 For all Sinhalese, astrology plays a fundamental role in every stage of life. Not taken any important decision without consulting an astrologer, whether it’s building a house, to make an investment or to take a trip. Everything depends on the position of the stars.

The birth of a child is the first opportunity to go to an astrologer. He will establish the astral theme that will decide the future of the child. It is a real ritual, during which there is the nam tebima, the “ceremony of the name,” that is the prescription of the first three or four letters with which parents have to dial the name that will bring good luck to their baby.

At the time of puberty of young girls, once again, the astrologer assumes a very important role. With the onset of the cycle, the mothers go to consult the astrologer, which determines how many years can be considered women, depending on the position of the stars on the day of their birth. Until then, the girl will have to remain closed and receive visits only by the women of his family. Finally, on the day indicated by the astrologer, his puberty will be celebrated with a ceremony during which the girl, now ready for marriage, receive gifts and jewelry.

Astrology also determines the gemstone most propitious for each individual: scope in direct contact with the skin, the stone will serve as a prism beneficial to direct solar rays and forward them to the body. Some gems have even the power to sweeten a fate too cruel, like those that make up the navaratna mudda, the ” ring of nine stones. ”

The signs of the zodiac, of course, have a prominent place in all advertisements double. Indeed, it is essential to check that there is no incompatibility between the intending spouses. Astrology also decides the wedding date in the best astral conjuncture, and allows you to check that the 20 virtues required to newlyweds are compatible with each other.

In Sri Lanka even policy is based on astrological counseling, which provide the choice of date more favorable for the elections, which take place every six years .

69% of the population of Sri Lanka is a Buddhist. This religion then dominates over the others and is one of the pillars of society. Besides, even the 1978 Constitution requires the state to protect the Buddhist cult, but without threatening the other cults. The country has more than 6,500 monasteries that are home to over 20 000 monks, divided into three main congregations. This community continues the long tradition of meditation and teaching began in There sec. BC, when the Buddha gave his first speech in front of Varanasi five disciples, which made ​​up the original community and decided to follow the Law of the Buddha.

In Pali, the Buddhist Monaco bhikku is called, which means “beggar.” In fact, the Monaco has no home or work, and according to one of the many rules of monastic discipline (Vinaya) should not own money. Other rules dictate not kill, do not steal, do not lie (and in particular does not pretend to have reached various stages of Awakening), do not drink alcohol, do not have sex, do not eat in the afternoon, do not sit on comfortable chairs, no witness performances of music or dance. The Monaco also has to dress simply. When he took his vows he shaves his head and receives from his family the traditional saffron-colored dress.

Her day in the monastery is divided between the study of Buddhist texts, meditation and any ceremonies of blessing for the laity who make claim. Eats twice a day, at sunrise and before noon. In the days of poya (full moon), traditionally holidays in Sri Lanka, the faithful gather in monasteries to attend a ceremony that lasts from sunrise to sunset. It is an opportunity for the monks to assist the faithful in meditation and for them to bring food, clothes, medicines and other everyday objects as a gift to the monastery. The gift, after all, is the most meritorious action spread among the faithful, and is a legacy of the oldest, since the original community and the Buddha himself survived thanks to the gifts they received from the laity.

In general, the laity have an attitude of respect and deference to the monks, who even places reserved on buses. There is a religious order, the vanavasin, who lives in an austere manner, away from the city and from other congregations, in contemplation, studying the sutras, the Buddha’s sermons and parables. Their monasteries are located in the forests, and have little contact with the laity, unless they do not reach the monastery to bring gifts. 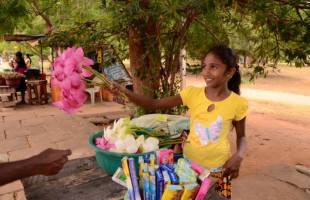