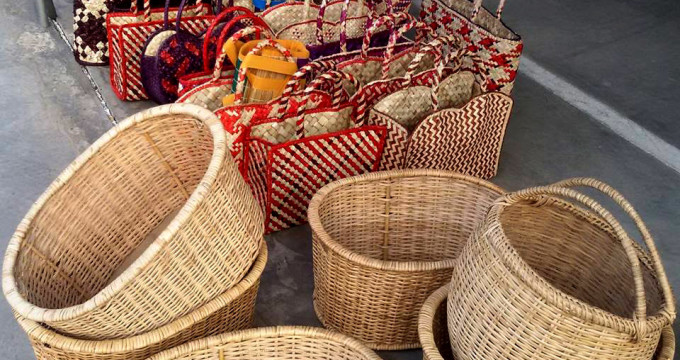 Sri Lanka’s legacy of craftsmanship dates back to the ancient kingdoms, when grand palaces, elaborate pleasure gardens and lavish temples and stupas called for the skills of the world’s best craftsmen. Fine craftsmanship of yore has cascaded from generation to generation and today, many artisans carry on the traditions of craftmakers in wood, brasswork, weaving, pottery, basketry or batik in various parts of the island, each part renowned for a skill or craft that would be hard to come by anywhere else.
Woodcarving
One of the oldest crafts still actively practiced, many panels are carved with age old designs which generally have interesting cultural links with the past. Kandy and its environs have a large woodworking concentration. Three dimensional carvings are also found in souvenir shops, especially those of elephants, fishermen and religious images, particularly of the Buddha.

Mask making
Ambalangoda in the south, is the best known district for masks. Using very light woods and a lot of relief work and modeling, demonic representations and characters from myths and legends are brought to life. Ceremonial devildancer masks are traditionally carved by the dancer himself and is carved according to strict specifications and carefully stained. The Kolam masks, with articulated jaws, rolling eyes and thick bushy beards are also turned out by master craftsmen. Today however, for the tourist industry, most masks are produced using enamel paints and range from intricate works of art to gaudy designs.

Lacquer work
Utilising colored lac to decorate a variety of wooden articles which could range from walking sticks, pill boxes, book ends, ash trays, letter openers and wooden handles, lacquer craftsmen paint painstakingly accurate designs using two principal techniques: Biraluvada or spool work used to decorate wooden objects pinning on a lathe and niyapotuvada or nailwork wherein the craftsman uses his thumbnail to guide and break off the filament of lac. Some artisans also produce lacquer work by painting the object and then covering it with layers of varnish. Lac is a resin exuded from certain trees after it has been punctured by the ‘lac’ insect. The resin is plucked from the bark, melted down, strained through muslin and worked like pulling sugar. While still soft, pigment is pounded into the lac to produce the desired colour and then dried.

Metal work
Utilizing gold, silver, copper, tin, lead, iron and various alloys, Sri Lanka goes back centuries into its history of marvelous metalwork, with the national museum housing some metal articles that date to 2,000 years ago. Gold and silver though usually restricted in those days for three purposes – royalty, religion and the ruling class, is now the adornment of nearly every Sri Lankan woman (and man).
Gold jewellery is the specialty in Pettah and Galle, for those who like this precious metal with intricate work or precious stones.
Silver, the favourite medium of filigree artisans, are generally in the form of necklaces and bracelets, serving trays, candelabra, tea sets, spoons and a wide variety of other ornamental items and even some very European inspired silver plated pieces.
Brass is the most common ornamental metal and is excellent in castwork, cutwork or repousse (all three metals of gold, silver and brass is used in this metalwork). The castings, done in by the lost wax method where a full size model is sculpted in wax, covered with clay and baked to form a mould, includes elephant,s Buddha images, huge standing lamps, bowls, trays and candlesticks.

Pottery
A living craft that permeates the very innards of Sri Lanka, scores of potters’ villages are found throughout the island, most using the traditional potters wheel and little or no glazing. Lamps, water jugs, versatile cooking vessels, ranges and sizes of pots and plant holders, wind chimes, decorative statues and figurines and even floor tiles, can be found in abundance, especially on the drive along the Colombo Kandy Road.

Batik, Handlooms, Lace
One of the most visible Sri Lankan crafts that are found in scores of galleries and factories that line the major highways. Created through a process of waxing an dyeing, the pattern is drawn on a piece of fabric, wax is applied onto the areas that are not to be dyed. The material is then dyed, rewaxed and dyed according to the number of colours on the pattern. Originally, one artist created the batik from start to finish, but now it works more akin to assembly lines. A few traditional artists still prefer to carry out the entire process alone, though the finished product in whichever mode, is still handmade.
Handlooms, especially those created by Barbara Sansoni, have become exclusive items renowned for their one of a kind weave and rainbow colours. An array of Sri Lankan handloom woven items can be obtained from sarongs, shirts, soft toys and even notebooks.
Introduced by the Portuguese and most prevalent in Galle, Colombo and Jaffna, lacemaking is a tedious affair which sometimes takes months to complete. The skills of septo and octogenarians make the most intricate patterns that transform into absolute beauty from a myriad of pins and spindles of thread.

Basketry
Mats are an important part of the village life in Sri Lanka as beds are hard to come by in homes as was in ancient times, where it was considered a necessary accomplishment to be able to weave mats. It is a cottage industry that comes out in all its glory especially at times of festivals and pageants. Dumbara mats are the most famous, woven in a village near Kandy, traditionally woven on a primitive loom using fibres from the bow-string hemp, decorated with stripes or patterned bands using techniques and patterns unchanged for centuries.
Another functional craft, baskets made of split bamboo or cane used for hauling produce, rice, chickens and a variety of other good is a very delicate craft. Kalutara in the south, is the best known for its mastery in basket weaving, and even has a ‘Basket Hall’ where the town weavers may be watched at work. In Jaffna, the palmyrah leaf is the most popular for basket weaving.

no comments
Art & Craft
1 out of 5 based on 2 user ratings
Is Sigiriya the 8th Wonder of the World?
Alutgama